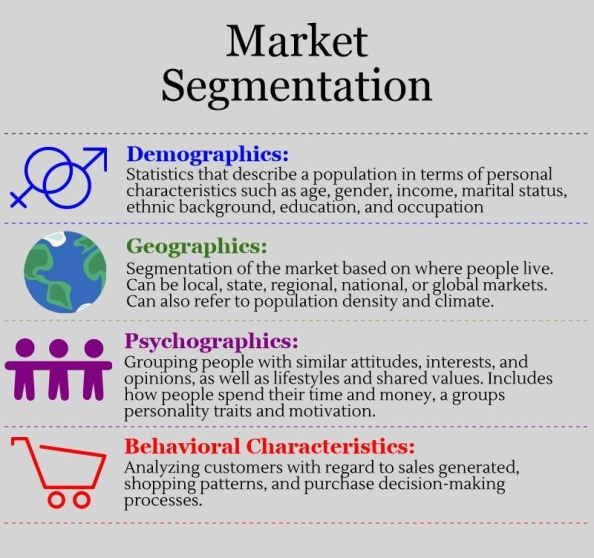 Users: The users are high school sophomores, juniors, and seniors, ages 15-18 that should all be at, or about at grade reading level. It is likely that most, if not all of these terms will be new to students.

Why Will These Work?: In this week’s reading, CARP was discussed in further detail. CARP stands for Contrast, Alignment, Repetition, and Proximity. For my graphic, I created a visual of the four ways that markets are segmented.

Contrast: Contrast can be utilized “by establishing differences between elements in a visual” (Lohr, 2008, pg. 200). Contrast was used a few times in this visual. I coordinated the color of each way to segment, grouping them with each corresponding graphic and changing the color to match. In addition, I used contrast by making the font bold for the type of segmentation and not for the explanation.

Alignment: The graphics, type of segmentation, and explanations are left-aligned for “easier reading” (Lohr, 2008, pg. 201). It makes the graphic look well-organized and consistent.

Proximity: I used proximity to show how each graphic is related to the type of segmentation and explanation within the each box. Each box has some space in between to show that they are all related to the concept of market segmentation.

User Test/Changes: Originally, I had graphics on both sides of the text. My friend said that it made the image too crowded and seemed a bit overwhelming. The updated image is simple, yet hopefully effective. It also is not as confusing. By having the pictures aligned-left with the text, your eye goes directly to the graphics and then right into reading the text.